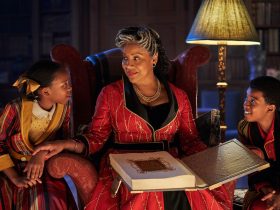 Jingle Jangle: A Christmas Journey Review: Appears To Be A New Holiday Classic for Underrepresented Audiences

Fans believe Harry Styles owns a secret Tiktok account. An anonymous username called @suemonella on Tiktok has only six videos, one of which features a Spotify plaque for Styles’ popular song “Watermelon Sugar,” which has gotten 1 billion streams. The video suggests a possible photoshoot with the pop singer.

According to the video uploaded on the TikTok account, Harry or a member of his crew is really posting videos to the account in question. Some viewers have noted that a piece of paper with some information on it appears in the clip. HS3 Announcement Video is a popular interpretation. Styles’ third album has no official title, thus it’s referred to as “Harry Styles 3,” as reported by Newsweek.

Aside from the Watermelon Sugar video, on the account, there are also videos of people exercising, looking at ladybugs in the mirror, and a woman walking up a set of pink stairs, which Styles has at home. The fact that Wolf Alice, the band who will be opening for the ‘Adore You’ singer on his next European tour, has a new video up only adds fuel to the fire.

New music has been anxiously awaited by fans. He’s been spotted filming around London for a probable music video. There have been tens of thousands of comments left under the enigmatically posted video from curious viewers.

Stylers, on the other hand, are persuaded that TikTok is really a promotional tool to provide them early access to new Harry music information. According to The Capital FM, fans believe he was making a music video for the song ‘Duvet’, as he was observed outside Buckingham Palace in a big bed while filming the video.

X-Factor is where Styles began his singing career, with Simon Cowell putting together a group of five teenagers and forming One Direction. After five years as a band, the popular group announced its hiatus. Two solo studio albums have been released since then.

Get Ready! EXO’s Ladder is Back as Group Members Spotted Filming