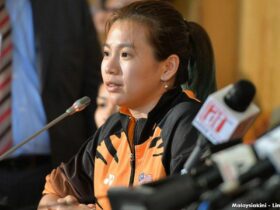 Season 3 of EXO’s travel reality show Travel Around The World On EXO’s Ladder will air. A Korean news outlet shared that the group members filmed scenes for their upcoming reality show on February 28.

According to a report published on February 28 by Sports Seoul, Suho, Xiumin, D.O., Kai, and Sehun are expected to attend the show, which started filming on the same. This season’s filming will occur in Namhae, Gyeongsangnam-do, and will air on Wavve in April.

On February 28, it was confirmed that the five current EXO members – Suho, Xiumin, D.O., Kai, and Sehun – had started filming season 3 of their reality show series ‘EXO Ladder.’ Season 2 took place in January 2019, with all eight active members traveling through Taiwan, playing games, completing missions, and having fun. However, they will not have Baekhyun, Chen, or Chanyeol in season 3 because they are currently serving mandatory military service. Fans, however, are hoping for a surprise appearance by one of the members, Lay, Meaww posted.

While Chinese member Lay has been unable to join EXO in recent years due to tensions between China and South Korea, he pleasantly surprised everyone by virtually joining EXO for their latest comeback, ‘Don’t Fight The Feeling,’ in June 2021.

Fans are excited about their comeback

The reality show follows them as they travel to different countries. They are using a ‘ladder’ to aid in decision-making. Friendship, music, and comedy are among the genres covered in the show. As evidenced by fan reactions, Season 3 of the show has already piqued fans’ interest.

Suho, the group’s leader recently discharged from the military on February 14, intends to raise audience expectations because this will be his first official activity with the members since his release. This year, the group will celebrate its tenth anniversary on April 8, which has intrigued fans’ interest, particularly those who are curious to see if they will join the fans in celebrating the special day.

According to SK Kpop, the fans are delighted to see the group’s true power and influence, ascribing to their upbeat personalities. Aside from being idols, the Love Shot members are known for their sense of humor, as proven by their appearances on JTBC’s Knowing Bros and EXO’s Arcade in 2021.