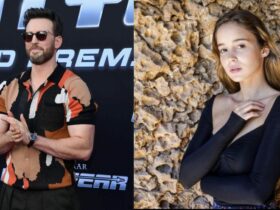 Who is Warrior Nun Actress Alba Baptista? Is she in Relationship with Chris Evans?

Aaron Rodgers, the quarterback of the Green Bay Packers, has had his decent share of public relationships over the years.

The quarterback, who has previously stated that having a relationship in the public eye is difficult, seems to be intending to keep his current relationship under wraps.

Rodgers was rumored to be dating Blu of Earth, a musician, podcast host, and medicine woman. Previously known as Charlotte Brereton, she is the host of the ‘Deja Blu podcast.

They were only seen in one photo together in June and kept their relationship private. Blu was one of the people who traveled to Peru with Rodgers when he consumed the hallucinogenic ayahuasca.

According to recent reports from an anonymous source, the Packers quarterback and Blu have split up.

Who has Aaron Rodgers previously dated?

Aaron Rodgers’ 1st public relationship was with actress Olivia Munn in 2014. They dated for three years before splitting up in April 2017.

He dated former racecar driver Danica Patrick after his break up from Munn. Despite meeting at the ESPYs in 2012, they didn’t start dating until 2018.

It is one of the quarterback’s most visible relationships. Patrick, who used to race in the INDY car series and NASCAR, would share photos of the two on social media and attend Green Bay Packers games.

Patrick announced in 2020 that they had mutually decided to end their relationship.

Following his breakup with Danica Patrick, he began dating actress Shailene Woodley. The two worked hard to keep their relationship private, but it was until he thanked his fiancee Shailene at the time of receiving his NFL MVP award in 2020. The cat was finally out of the bag.

Woodley and Rodgers spent the offseason before the 2021 NFL season together. They split up before the season started. They reconciled but then parted ways again, and their engagement was officially called off in the spring of 2022.

Aaron Rodgers appears to be single right now. The Green Bay Packers’ current woes, including four straight losses, have the 38-year-old quarterback concentrated on other things.

The relationship between Shailene Woodley and Aaron Rodgers had its ups and downs. The couple dated on and off before finally breaking up.

While the two appear to have moved on, Aaron Rodgers reportedly tried hard to make amends with Woodley in the past.

Rodgers, according to Elle, attempted to apologize to Woodley. He even paid tribute to her on Instagram to win her back. The 30-year-old actress, on the other hand, was said to be ‘hesitant.’

“They both had intense work schedules in the fall, and it was impossible for them to focus on their relationship,” Elle reported. “Now that Aaron’s season is over, he wants to try it again.”

Her friends were reportedly skeptical of the relationship. They didn’t think Rodgers was the right man for Woodley, especially since he was so preoccupied with football.

Who is Aaron Rodgers currently dating?

Rodgers has been dating a woman named Blu, according to recent reports. She is said to be a “medicine woman.” She avoids the spotlight and stays out of the public eye. Aaron Rodgers has not confirmed his involvement in any relationship and has avoided discussing it on social media.

New rumors about Rodgers emerged only after his confirmed breakup with Woodley, who, according to reports, is doing well for herself. Though the split hurt her, the Divergent actress has focused on moving on.

Rodgers, for one, appears to be focused on the 2022-23 NFL season. On September 11, Rodgers and the Green Bay Packers will kick off their season against the Minnesota Vikings.

AR12 has been in the news for some unfavorable reasons throughout the preseason. Most notably, he admitted to using ayahuasca, a psychedelic plant used by South American tribes.

While this drug is legitimate in that area of the planet, it is illegal in the United States. Rodgers claimed that the drug helped him perform better in the NFL by improving his mental state. His confession was backed up by his rumored girlfriend, Blu, who describes herself as a mystic.