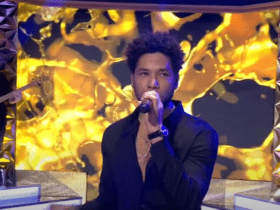 Fantastic Beasts: The Secrets of Dumbledore

Albus Dumbledore will be the central character in the fantasy film, as he contends with the evil wizard Gellert Grindelwald during the latter’s battle against the muggles. In the film’s recently released trailer, the suspenseful events that will unfold on screen have already been put in motion.

According to Outlook India, it has been confirmed that actors Ezra Miller (Aurelius Dumbledore), Alison Sudol (Queenie Goldstein), and Katherine Waterson (Tina Goldstein) will return on their respective roles in the film. Jessica Williams, who plays professor Eulalie Hicks, and Dan Fogler, who plays Muggle baker Jacob, are among the other actors who will appear in the film.

J.K. Rowling, the author of the first two films, has co-written the film’s script with screenwriter Steve Kloves, who has worked with her on other projects. Two additional ‘Fantastic Beasts’ movies are in the pipeline in the meanwhile. Hindi, English, Tamil, and Telugu will be the four official Indian languages for the film.

As shared by Wiki Fandom, Albus Dumbledore (Jude Law) is aware that Gellert Grindelwald (Mads Mikkelsen), a powerful Dark wizard, plans to take over the wizarding world. Newt Scamander (Eddie Redmayne), unable to defeat him on his own, is sent to lead a team of valiant wizards and witches along with one brave Muggle baker on a perilous expedition to confront Grindelwald and his ever-expanding army of followers.

Robert Pattinson Allegedly Steals Socks, amid Shirtless Appearances to Show off His Figure from The Batman Movie