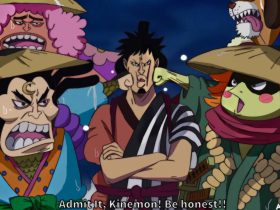 As we told you, Kimetsu no Yaiba, better known as Demon Slayer in the West, arrived in Latin America and other regions in recent months through Netflix. However, popular anime is giving a lot to talk about in South Korea, and fans of that country are not happy with a characteristic element of the main character.

What happens is that Tanjiro Kamado, the protagonist of Demon Slayer, wears a pair of earrings with the design of the Rising Sun of Japan. In the West, that detail is superficial and does not represent a problem, but for South Korea, the symbol is highly offensive.

In case you missed it: Demon Slayer: Mugen Train becomes the highest-grossing film of 2020 worldwide

We must remember that Japan invaded South Korea from 1910 to 1945, and during that period the Japanese country used a symbol very similar to Tanjiro’s earrings as a war banner, so it is undoubtedly a bitter memory for South Koreans.

DEMON SLAYER IS CENSORED IN SOUTH KOREA
Of course, South Korean fans weren’t happy with Tanjiro wearing those earrings in the anime, so they demanded they change the design.

To avoid further controversy, the accessories used by the protagonist were slightly modified in the South Korean version, although they still retain some of the characteristics that angered the Asian country’s community. However, Netflix made the mistake of promoting the anime with an image from the original version, sparking controversy once again.

But tell us, what do you think of this situation? Do you think these types of elements should be censored? Let us read you in the comments.