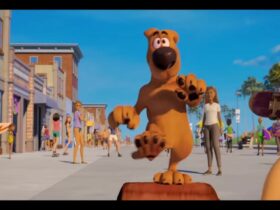 What is the hype about the movie scoob?

Sony Interactive Entertainment (SIE) introduced the upgraded designs for its PS5 virtual reality (VR) components, such as the  PlayStation VR2 Sense controllers, and PlayStation VR2 headset on Tuesday. According to Sony, the VR2 was created in tandem with the PS5, as seen by the white and black color scheme of the new headset and controller.

The new PS VR2 headgear, like the PS VR2 Sense controller, has an “orb” form that represents the players’ 360-degree vision of the virtual reality environment. A lens adjustment dial, a smaller shape, and a minor weight decrease are among the new characteristics of the headset.

The first PlayStation VR headset was released in October of 2016. ShuheiYoshida, president of Sony Computer Entertainment Worldwide Studios, first debuted the headgear at the Game Developers Conference (GDC) in 2014, then Sony upgraded the device at GDC in March of 2015, as mentioned by the Anime News Network site.

The PlayStation VR2 headset, as well as the PSVR2 Sense controllers, have been announced by Sony. It’s sleeker, lightweight, and features a vent.  The sleek, curved, white-on-black design, according to senior vice president for system experience Hideki Nishino, is thinner and somewhat lighter than the existing PlayStation VR model.

Nishino also posted a comment from senior graphic artist Yujin Morisawa, who boasted about how he was able to include a circulation vent in the design, which should assist keep the lenses from fogging up. Last year’s prototypes were comparable to the final Sense controllers. The headset shares the original PSVR’s single, simple adjustable headband as well as the adjustable scope, so it’s not a full redesign.

PSVR2 has eye-tracking, interior camera tracking therefore, no PlayStation Camera is required. A motor providing tactile input from the headset itself, a 4K HDR display with a resolution of 2000×2040 per eye, and a single wire connection to the PS5 system, as reported in January, as specified on the post of the Polygon news.

Detective Pikachu 2: Still in the works for the Nintendo Switch