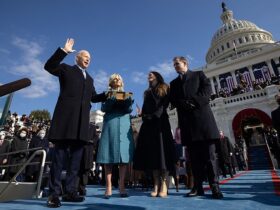 A woman from North Carolina Sarah Granados got a life-changing multiorgan surgery that gave her a new stomach, pancreas, and intestines after being unable to eat solid foods for almost a decade due to a rare disease. Sarah Granados, a mother of three from Gastonia, North Carolina, awaited 444 days for the transplant, that took place in November at Indiana Health University Hospital in Indianapolis, more than 500 miles away.

According to Sarah Granados’ statement, it restored her children’s relationship with their mother. It allowed her husband to reclaim his wife. It allowed her to dream about things she hadn’t dreamed about in years due to her fear of doing so. Since 2012, when she underwent what was thought to be normal surgery to remove her gallbladder due to a potentially malignant lesion, Granados has experienced life-threatening medical issues.

Granados has Hypermobile Ehlers-Danlos syndrome, a hereditary connective tissue illness that can cause gastrointestinal trouble, and doctors feel she was uniquely affected by the surgery, despite the fact that there were no complications, as per ABC News.

Connective tissue condition is hereditary that caused by mutations in the collagen protein. Although considerable difficulties might arise, it is typically considered the least severe variant of Ehlers-Danlos syndrome (EDS). Joint hypermobility, which affects both major knees, elbows, and tiny fingers, toes soft joints, smooth skin that is slightly elastic and readily bruises, and persistent musculoskeletal (bone and muscle, discomfort are all common symptoms.

While hypermobile EDS is thought to be a hereditary disorder, the hereditary cause is unknown because the genes responsible have yet to be discovered, according to Rare Diseases website.

Autosomal dominant inheritance is the most common type of inheritance. The goal of treatment and management is to avoid serious problems while also alleviating associated signs and symptoms. According to the National Institutes of Health, Sarah Granados was diagnosed with severe gastroparesis, a condition that slows or stops the flow of food from your stomach to your small intestine, Yahoo News reported.