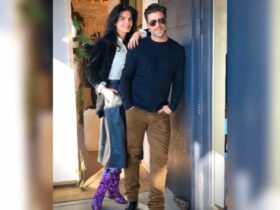 Every little detail on Greg Vaughan and Angie Harmon

The ‘My Dress-Up Darling’ anime is a smash hit with fans, which means more people are reading Shinichi Fukuda’s original manga. The manga’s circulation has risen by an astonishing one million copies thanks to the good ol’ anime boost.

With that figure, the total number of ‘My Dress-Up Darling’ volumes sold—both in print and digitally—is 4.5 million. Right before the anime debuted, the series had 3.5 million viewers at the start of the year so the results are indeed very clear, Otaku USA Magazine reported.

‘My Dress-Up Darling’ creator expresses gratitude to the team

On social media, manga creator Shinichi Fukuda expressed his happiness at the announcement, thanking fans for their support and applauding the “awesome” anime staff and sales position.

The anime adaptation, which is presently in its fourth episode, is available to watch on Funimation. The program is directed by Keisuke Shinohara (Black Fox), with animation by CloverWorks (Horimiya). The series composition is managed by Yoriko Tomika (Osamake), while the character designs are done by Kazumasa Ishida (Character Design Assistant Saekano the Movie: Finale).

Winter’s main character, Marin Kitagawa, has been brought to life thanks to a fantastic ‘My Dress-Up Darling’ cosplay! The first part of the Winter 2022 anime calendar has passed, and viewers have had the opportunity to see the new anime debuts they have been anticipating.

One character stands out in ‘My Dress-Up Darling’

However, the calendar was rather competitive, since not only were there some fresh new programs to watch, but other significant heavy hitters were also running new episodes. Despite all of the competition, one character has already made a major impression on fans in just a few weeks after the debut.

Since the release of its anime adaptation earlier this Winter, Shinichi Fukuda’s original manga series has exploded in popularity, thanks to all of the quick attention fans have devoted to its main heroine, Marin.

She immediately became a fan favorite due to her apparent interest in cosplay and other fandoms, and her desire to completely embrace her passion alongside the quiet and introverted artisan Wakana Gojo is one of the reasons why fans adore the series, as per Comic Book.