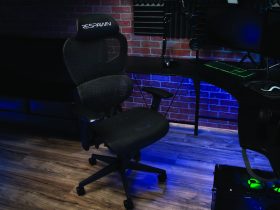 The Respawn Specter Gaming Chair Review: Should I Go For It or Not?

Bandai has published a new video for Mobile Suit Gundam: Cucuruz Doan’s Island, as well as a flood of new artwork the film, will premier on June 3, 2022.

The new trailer showcases the new CG-animated renderings of RX-78-2 and other One-Year War mobile suits in action. Along with the teaser, Bandai released two new posters for the film, depicting the conflict between Amuro’s Gundam and Cucuruz Doan’s MS-06F Zaku II and the White Base crew.

Newline artwork of the movie’s Gundam concept, as well as Doan’s battle-damaged mobile suit, were also released by the firm. Shunsuke Takeuchi, the new voice of Cucuruz Doan, the Zeon deserter after whom the titular island is named, has been announced as a member of the film’s cast.

Tohru Furuya, who has been the voice of Amuro Ray from the franchise’s inception in 1979, will also appear in the film. Bright Noa will also be voiced by Ken Narita. After Bright’s voice actor, Hirotaka Suzuoki, died of lung cancer in 2006, Narita took over the part of the slap-happy Federation commander in 2010’s Mobile Suit Gundam Unicorn.

Cucuruz Doan’s Island is one of six new Gundam films scheduled for release in 2022. Mobile Suit Gundam: Iron-Blooded Orphans, a critically acclaimed 2017 anime series, will be aired in Japan in April with a “Special Edition” edit that will include additional animation,  according to the published article on the CBR website

Yoshiyuki Tomino and Sunrise created Gundam, a Japanese mixed-media brand centered on mecha robots. The Mobile Suit Gundam animated series debuted on April 7, 1979, and marked the start of the franchise.

As the director, Yoshikazu Yasuhiko stated that this will most likely be the last time he adapts Gundam for the screen, that the Gundam franchise will always mean the first Mobile Suit Gundam anime to him, and that directing the film left him with no regrets.

He also said that he was not planning on retiring, but that he was content with himself and the picture at the moment according to the Anime Corner website.