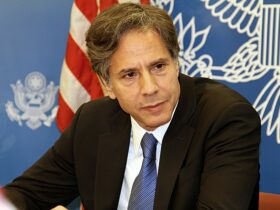 Putin’s Plan Has Always Been to Destroy Ukraine, Its People, and Democracy, Antony Blinken Says

In the K-pop industry, idols are celebrities who are revered and adored for their appearance, their fantastic demeanor, and their ability in their respective fields of expertise. They have personalities that are larger than life, and they are fashionable to the core.

Whether consciously or unintentionally, some K-pop idols have been compared to anime characters in real life. It could be owing to their dress or simply the out-of-this-world appearance that they appear to be unreal, yet it is possible that they are.

As reported by IWM Buzz.com, they compared the BXT member Beomgyu with Kou Mabuchi of Ao Haru Ride. There is a resemblance, especially in the color of the hair. Their difference is the color of the eye, in which Mabuchi has red-eye.

The next one is Kai of Exo and Dragon Ball Z’s Trunks. They are really look-alike. They have the same color of hair, same eyes, and how they pose.

Another comparison made by All K-pop News is CL of the former girl group of 2NE1 and Inuyasha. CL has white hair just like Inuyasha. 2NE1 was disbanded in 2016, as a result of being unable to “control” by YG Entertainment.

Interest in anime and K-Pop booms

Classic anime cartoons like Pokémon, Digimon, and Dragon Ball have already become childhood favorites. But the more obscure and niche aspects of anime have never been as popular as they are now. Because anime provides something for everyone, despite what our parents may think, it has provided the global population enough to watch while confined at home.

As reported by Her Campus, while anime has never had much of a presence in popular media, K-pop has always had a strong presence, with many of the songs sung by K-pop performers being greatly inspired by the music of their widely famous Western counterparts. 2020, on the other hand, appeared to be the year for K-pop.