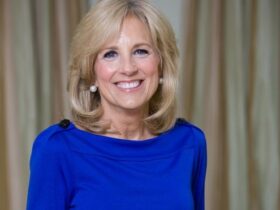 Jill Biden, Others Present at State of the Union Address Rise in Support of Ukraine

Because he threatened to bomb Moscow, Donald Trump claims Russia did not invade Ukraine when he was president. The 75-year-old former Republican president told pro-golfer John Daly on Friday that he and his Russian counterpart Vladimir Putin “get along well.”

It comes as devastating photographs of Vladimir Putin’s battle surface, including a newborn being carried through the ruins. In addition, Russian generals have been ordered to assassinate deranged Putin in order to put an end to the conflict in Ukraine. Meanwhile, Vladimir Putin is suspected of using chemical weapons on people, as he did in Syria.

Trump was seen playing golf with a group of friends on Friday at his West Palm Beach property, as per The Sun. Allan Kournikova, the Russian-born half brother of former pro tennis player Anna Kournikova, golf coach Eduardo Miquel, and Chilean PGA players Mito Pereira and Joaquin Miemann were among those who took to the greens with the 45th President.

The ex-POTUS was also spotted golfing at his West Palm Beach club last Friday, just days before his speech at the Conservative Political Action Conference (CPAC). Trump asserted twice during that address that if he had been president, Putin would not have invaded Ukraine.

Donald Trump maintained his pride in the fact that Vladimir Putin did not launch an invasion when he was in the White House, as he has done since the Russia-Ukraine crisis worsened.

On Friday, Trump’s former national security advisor John Bolton said that Putin was planning an invasion of Ukraine in anticipation of Trump’s probable second term, assuming that he would pull the US from Nato.

According to Metro, Donald Trump’s comments about the Russia-Ukraine crisis have gotten a lot of attention, especially when he called Putin a “genius and smart” for his actions against the sovereign country.

President Joe Biden said, “I put as much trust in Trump claiming Putin is a genius as I did when he declared himself a stable genius.” Trump hit out at the media and several Republicans earlier this week, accusing them of distorting his statement.

What is the new update about Larry wheels girlfriend ?

Are the rumours about Shane Gillis Girlfriend true?