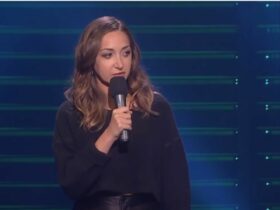 Everything You Need To Know About Jamie Lee comedy

Track star Mizuki appears undaunted by the competition in a new cosplay by One-Punch Man’s fan. In her rendition of the athletic marvel technically known as Captain Mizuki, cosplayer Nerdy Nereid hopes to take first place.

Wearing track spandex as her source material, Nerdy Nereid’s costume is as straightforward as its inspiration. It’s a simple design that hides all of its unusual features, like her high red ponytail, a white stripe down one side of the spandex with the initials “MZK” sewn on it, a band-aid over one cheek, and medals dangling from her neck.

As for the setting, the hero is positioned on a sports-themed backdrop.

According to CBR, there are a wide variety of monsters and heroes to be found in the world of One-Punch Man, such as those born from natural disasters, alien species discovered thousands of feet beneath the surface of the earth, and once-normal people transformed into the extraordinary due to accident, mutation, or willing experimentation.

Captain Mizuki, on the other hand, is an extraordinarily brilliant athlete, but she’s still a human being in the eyes of the law. The fact that she is only ranked as a B-Class hero shows that the hero association views her as less powerful than the A-Class and S-Class heroes, who are both ranked significantly higher.

What to expect on Season 3

The third season of One-Punch Man is eagerly anticipated by fans following the success of the first two. What can you anticipate from season 3 of the One-Punch Man? After a long break between seasons, the third season is expected to arrive soon. The second season featured full of great events, but the focus was largely on Garou The Hero Hunter and the Monster Association’s arrival.

According to Game Rant, the second season included a fruit-like material known as “Monster Cells,” which can change a strong human into a strong monster with brute force. Due to this, Garou refuses to swallow the monster cells, even though his wicked nature and violent instincts make him want to do so.

In order to become a monster, he doesn’t need anyone else’s help. As Garou fights against heroes and demons alike, he slowly but surely acquires strength and experience. After several defeats, he keeps coming back until he ultimately discovers a strength beyond his wildest dreams.’ S-Class heroes and Dragon-Level monsters will be no match for Garou in Season 3.

It’s nearly impossible to handle S-Class heroes because they’re tremendously powerful and quirky. Heroes cannot be compelled to do anything by the hero association. Even if you exclude the fact that they are largely loner types, It’s pointless to cooperate together when you can defeat big monsters on your own.

As per the report,  they will have to work together for the first time in season 3. All of the S-Class heroes, including Tornado of Terror, Atomic Samurai, Silver Fang, Demon Cyborg, Dark Shine, Child Emperor, and King, will face creatures that will put up a fight. Only the S-Class is taking part in this massive conflict, although many heroes from A-Class through C-Class are also involved.

Some provide assistance to the S-Class, while others assist in the evacuation.