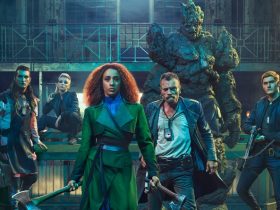 The Watch Review: The New TV Show of BBC America Based on Discworld

Game developer Raven Software has revealed what they’ve been cooking up for “Call of Duty: Warzone’s” Pacific content. The devs believe that there’s a lot of money moving around and with that, they’re planning to tone down the flow of cash within the BR shooter.

Raven Software is setting its sights on what is described as an overabundance of cash in “Warzone” as part of their balancing plans for the game. The developer also mentioned that the update will be rolled out soon according to Dexerto.

Raven’s Twitter page noted that Call of Duty: Warzone’s cash economy is one of the core pillars of the experience. Further, the devs explained that they recognize that the experience as of late lends to an overabundance of cash in the game. As mentioned, they went on to announce that they’re “working towards a more balanced approached” adding tweaks for this part of the game is slated to arrive as soon as they come up with a solution.

The Cash 💰 economy in #Warzone is one of the core pillars of the experience.

With that in mind, we recognize that the current experience lends to an overabundance of Cash.

We're working towards a more balanced approached. Updates will come as we hone in on a solution.

This announcement from the developer was not well-received by “Warzone” players. The community is not too concerned about the amount of cash in Caldera. What the playerbase wants is for Raven to find solutions for both the BR title’s performance and economy.

“Warzone” content creator TeeP stated that it might help the in-game cash flow if players had something to spend $10K on earlier in the game. Additionally, FaZe Kalei tweeted that the developer could make the Buy Station prices a bit steeper to alleviate the effects of cash flow.

make self res more expensive, loadouts 15k-20k etc boom problem solved, people do bounties or other contracts to get cash etc to make people move around the map. i know easy fix you guys can hire me

Former field hockey player and Olympian Samantha Quek also pitched an idea that Raven should be prioritizing other issues within “Warzone.” She highlighted that the game is currently plagued with problems on the console and went on to state that it’s a bigger issue that needs to be addressed than any amount of cash in the game.