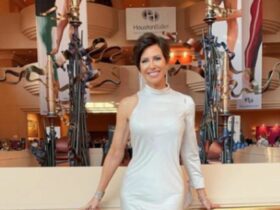 Get To Know About Dominique Sachse Divorce

The Super Nintendo World zone at Universal Studios Hollywood will open in 2023, according to the park’s announcement on Thursday. The Feature Presentation store at the park will shortly open with exclusive Nintendo-themed products.

The Super Nintendo World area, located near the Transformers ride in the lower portion of the park, is currently being built. According to a tweet from Universal Studios Hollywood, Super NintendoWorld will open in 2023, with unique products available at the soon-to-launch Feature Presentations store.

There will also have wristbands that can keep track of scores, along with a park-wide ranking board, coins, and stars from numerous rides, and they can interact with a game console. The attractions are given magnetic Powerup Bands that allow tourists to interact with the theme parks, such as hitting real-life Blocks, as published by the Anime News Network.

SUPER NINTENDO WORLD was created in collaboration with Nintendo and Universal Creative to give spectacular entertainment based on characters and video games that have captivated millions of Nintendo fans for over four decades.

The park is Nintendo-themed in general, the Mario franchise has gotten the most attention so far, with features, rides, and stores themed after Mario, Yoshi, Toad, and the rest of the crew, as well as rides inspired by popular series like Mario Kart.

As the countdown to the land’s thrilling premiere begins, Universal Studios Hollywood will present a SUPER NINTENDO WORLD-themed takeover of its iconic Feature Presentation retail store, which will open soon.

Guests will be able to demonstrate their excitement for the land’s debut in 2023 by purchasing merchandise like Mario and Luigi-related attire and iconic character hats, which will be located inside the theme park’s main entrance. Among the many entertaining goods available for purchase will be a range of plush characters, including Yoshi, Bowser, Mario, and Luigi in a variety of sizes according to the NBC Universal Media Village website.

The Saint’s Magic Power Season 2 on the Works, Release Date to be Announced